Mortgage loan performance continues to show improvement with the latest figures revealing the lowest delinquency and foreclosure rates so far this century.

CoreLogic’s Loan Performance Insights Report reveals that 4% of mortgages were in some stage of delinquency nationally in February, the lowest rate for a February since in at least 19 years. The rate was 0.8 percentage points lower than in February 2018.

Meanwhile, the foreclosure inventory rate –the share of mortgages in some stage of the foreclosure process – was 0.4%, down 0.2 percentage points year-over-year and sharing the lowest rate for any month since at least January 1999 with November and December 2018 and January 2019. 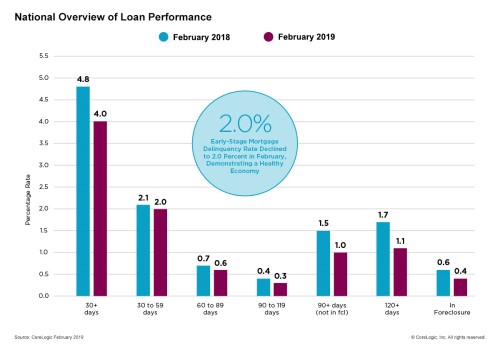 The share of mortgages that transitioned from current to 30 days past due was 1% in February 2019, unchanged from February 2018.

“We are on track to test generational lows as delinquency rates hit their lowest point in almost two decades. Given the economic outlook, we are likely to see more declines over the balance of this year,” said Frank Martell, president and CEO of CoreLogic. “Reflective of the drop in delinquency rates, no state experienced a year-over-year increase in its foreclosure inventory rate so far in 2019.”